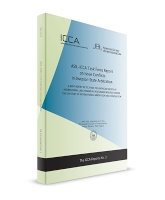 The mission of the Task Force on Issue Conflicts is to evaluate and report on issue conflicts in investor-State arbitration, and to make recommendations on best practices going forward.

This Task Force is the first collaboration between ICCA and the American Society of International Law,  under the auspices of the Howard M. Holtzmann Center on International Arbitration and Conciliation.

ICCA publishes the Report of the Joint ASIL-ICCA Task Force on Issue Conflicts in Investor-State Arbitration as the latest Volume of the ICCA Report series.

Task Force Members meet during the the American Society of International Law’s Annual Meeting to discussthe draft report on 9 April 2015. The discussion will include a debate on some of the key issues in the report, with participation of Professor Victoria Shannon (Washington and Lee University) and Joseph Brubaker (Kirton McConkie).

In late 2013, the then-Presidents of ASIL and ICCA, Donald Donovan and Jan Paulsson, named a Task Force of experienced arbitration practitioners and scholars to examine the growing phenomenon of challenges to arbitrators in investment cases alleging some form of “issue conflict.”  The stated mission of the Task Force was “to evaluate and report on issue conflicts in investor-State arbitration, and to make recommendations on best practices going forward.”  The Task Force co-chairs are Professors Laurence Boisson de Chazournes and John Crook, assisted by Rapporteurs Christian Leathley, Ina Popova, and Ruth Teitelbaum.

Drawing on the views and comments of Task Force members and a review of challenge cases,  legal literature, and practice in other areas, and with the outstanding assistance of the Rapporteurs, the Task Force co-chairs have prepared the accompanying draft report analyzing the issue, which the authors believe is more correctly described as “inappropriate predisposition.”  The report describes several patterns that appear to be emerging from decided challenge cases to date.

On 8 April 2014, the Joint ASIL-ICCA Task Force on Issue Conflicts in Investor-State Arbitration (Task Force), co-chaired by Professors Laurence Boisson de Chazournes and John Crook, held a luncheon meeting open to all attendees of the ICCA Miami Congress. The well-attended meeting was designed to elicit discussion concerning the notion of “issue conflicts” in investor- State arbitration, in order to assist the Task Force in defining the problem and determining the nature of its future work.

The luncheon attendees were given a list of questions concerning the definition of “issue conflict,” factors that might be considered in assessing whether disqualification might be warranted on the ground of “issue conflict”, and the role of the Task Force going forward. The questionnaire provided the point of departure for a dynamic group discussion among arbitrators, practitioners and scholars. Comments and questions addressed the role of arbitrators, circumstances that might give rise to bias and predisposition, and concerns about the possible chilling effect that “issue conflict” could have on scholarship and arbitration practice.