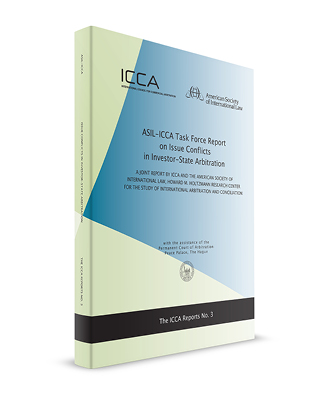 This Volume of the ICCA Reports publishes the Report of the Joint Task Force on Issue Conflicts in Investor-State Arbitration established in November 2013 between ICCA and the American Society of International Law’s Howard M. Holtzmann Center. The Task Force was composed of a diverse group of leading experts from a wide range of professional backgrounds, including arbitrators, counsel, members of arbitral institutions, and academics. The Report was prepared by the Task Force Co-Chairs, Laurence Boisson de Chazournes and John R. Crook, with the assistance of reporters Christian Leathley, Ina Popova, and Ruth Teitelbaum. It is based on the work of the Task Force, comments received on a publicly available discussion draft of the Report, and multiple public consultations over a two-and-a-half year period. We hope that the Report will assist all stakeholders not only in the evaluation and practical resolution of potential challenges, but also in reflecting on the fundamentals of the investor-State arbitration system itself. To find out more about the Issue Conflicts Task Force, click here.